Solar Panels convert sunlight directly into useable electric power. Sun never demands any bill, cost or fee while it’s supplying sunlight to our planet. Every day, sun rays travel in space over a large distance till the rays hit our roof tops.

The structural configuration of Solar Panels

Silicon cells are the backbone of solar panels. Generally, a Solar panel has a series of interconnected silicon cells that are linked together forming a power circuit. Silicon is a semi- conductor and this in-built feature becomes the main backbone that is why silicon is used as a fundamental configuration. These cells are structured & constructed with a positive – a negative layer, collectively creating an electrical field like a battery.

As the sunlight strikes Solar panels, photovoltaic cells get energy and due to their random motion, the energy is generated in the form of Direct Current commonly known as DC. The rays coincide with the solar panels and the conversion goes on. Solar Panels are the main stream of energy in our modern world. Once electric energy is produced, it simply needs to convert the DC power produced by the panels to AC power (Alternating Current) that can be used in your home and sent to the grid. The inverters are used to complete the job and then the alternating current is supplied to the house. 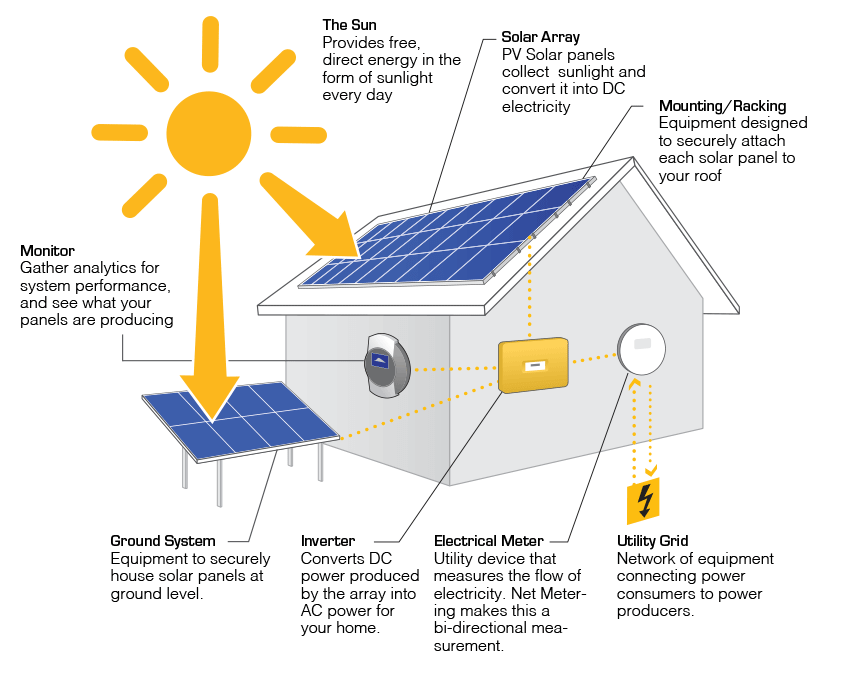 What happens when your system produces more electricity than you are using at your property? Simple: it is sent out to the energy company to power the grid. The energy flow is tracked meticulously by your bi-directional electrical meter. This process is commonly known as Net Metering.

Our team of experts are here for You, dedicated to providing sustainable and affordable solar power systems